Culinary Arts students at the University of Derby have won a place at the top table when it comes to Asian cuisine by getting through to the final of a national competition designed to spice up job prospects for young chefs.

Three Hospitality and Culinary Arts students will battle it out in February with five other colleges, institutes and universities for the Zest Quest Asia title.

Britain’s appetite for Asian food has created a demand for trained chefs which isn’t being met, says celebrity chef Cyrus Todiwala OBE, who designed the competition in collaboration with the Master Chefs of Great Britain to promote the potential of a career in Asian cookery to catering students.

Asian cookery is already on the menu at the Buxton Campus as part of its International Cuisine Module, which features not just Indian, but also Chinese, Indonesian, Malaysian and Japanese food.

Last year, student Anthony Wood  made it to the final of the Wing Yip Oriental Chef of the Year contest.

Culinary Lecturer Leonard Cseh said: “There’s a big market for this area of knowledge and skills It’s not just about being able to cook, but also being able to understand the principles behind what those flavours mean. 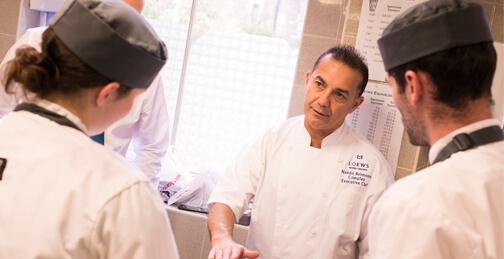 “That includes knowing about the provenance of the ingredients, the heritage behind them and how to develop new dishes.”

Mr Todiwala, whose Café Namaste in London helped start a revolution by bringing authentic Asian food to the UK, has gone on record as saying that because they are so well travelled, the British public have the most discerning palates in the world.

Find out more about studying Culinary Arts at Derby.