Recognition in one of Derbyshire’s highest profile business competitions has sealed a decade of success at the Devonshire Dome, home of the University of Derby’s Buxton Campus.

The Campus has re-invented the magnificent Grade II* Listed Building, not just as a place of learning, but also a vibrant commercial space. The Dome now hosts a range of exhibitions, conferences, banquets, celebrity weddings and national award ceremonies.

The University has been shortlisted in the Derbyshire Times Business Awards Hospitality Leisure and Tourism section, and also for its People Development Award. Winners will be announced on November 10.

“We are now recognised as one of the leading venues in the county,” said the University of Derby’s Assistant Director of Operations Joel Fagg. “It’s fantastic recognition for everything that has been achieved here over the last ten years.”

The Dome began life as a stable, became a hospital and, in 2006, was officially opened as a University by Prince Charles after a five year building programme funded by £6 million in grants from the Heritage Lottery Fund; £2.6 million from the Learning Skills Council; £1.5 million from the Higher Education Funding Council for England and £1 million from the Single Regeneration Budget Programme of the East Midlands Development Agency.

Award judges have also been told that permanent full-time jobs have been created, and 30,000 visitors attracted to the area each year, boosting the local economy. 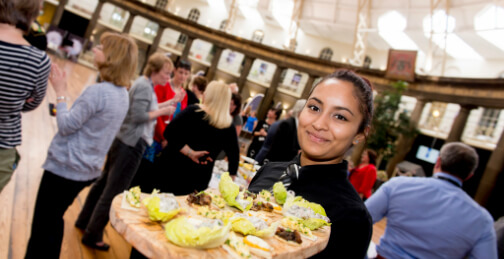 “This proves what a good investment this was for the public,” said Joel, who added that the Campus was now believed to contribute £32 million a year to the economy and support 500 jobs.

Being shortlisted for the People Award was especially welcome, added Joel, who said that in the last year, 22,416 hours of real world learning experience was completed by over 180 students and £169,421 paid in wages through an earn-while-you-learn scheme.

The Buxton Campus has five fully commercial business units including the Devonshire Spa, Dome Events, a Restaurant, Cafe and a Hair and Beauty Salon. These deliver a student-centred, industry recognised, real world learning environment creating opportunities for both Further Education and Higher Education students to gain employability skills and provide experienced staff for many of the hospitality and leisure businesses in the area.

During the last year, The Dome has worked with 23 community partners and 17 local charities to deliver events that without this support may not have happened.  Asian weddings at the Dome have encouraged diversity among the visitors to Buxton and along with the corporate events, has improved overnight stay business for local hotels and businesses bringing increased spend in the town.

“The success of our work here  is shown through the graduate employability of our students, with many going on to work in high profile industry recognised establishments such as La Manoir Aux Quat’Saisons, Fera at Claridges, Gleneagles and the Ritz Carlton Spa in Abhu Dhabi,” said Joel.