Actor gives up centre stage to educate the next generation

A University of Derby graduate is set to give up his space in the limelight to educate the next generation of actors.

Since graduating in Film and Theatre in 2012, Timothy Gough, has taken centre stage in lead roles in a range of musicals from Hairspray (Leeds Grand), to Legally Blonde (York Grand Opera House), and most recently The Wedding Singer (Sutton Arts Theatre) and Rent (Old Rep, Birmingham).

The 28-year-old, from Cannock in Staffordshire, has also appeared on the big screen in films such as, Tim Burton's 'Miss Peregrine's Home for Peculiar Children' and 'Testament of Youth'. 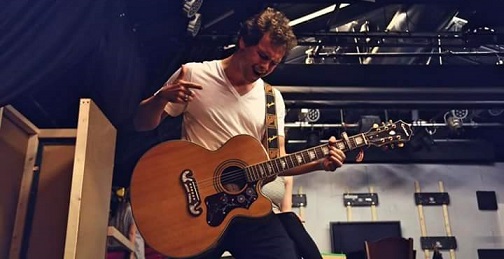 Tim’s television credits consist of: Peaky Blinders, Hollyoaks, Victoria and he is set to appear in the upcoming ITV series 'Cold Feet', which is due to return to the screens next month.

Having had his time in the limelight Tim, is due to start a Post Graduate Certification in Education in Post Compulsory Education in September, at university, in the hope he will be able to inspire a younger generation of actors and film students as well as continuing to act onstage and on camera still.

Tim said: “It gave me the means to be an artist, in the broadest sense of the word. At Derby I was able to act, write, learn and socialise within a diverse community, all in the name of education. You don't get many opportunities like that.

“My main inspiration came from the artists I myself was studying. Be them actors, filmmakers or writers, their achievements were enough to motivate me on a daily basis.”

Teresa Forde, Lecturer in Media studies at the University of Derby, said: “I think it is great that a student who majored in Film and Television has gone on to become so successful on stage and screen. In Film and Television Studies we encourage students to be independent thinkers, to develop their potential and to become confident in themselves.

“It is extremely rewarding to see that Film and Television Studies has contributed so much to his performance work. I’m sure that he will go on to inspire many other students in the future. I will certainly be inviting Tim to come back to talk to our current students about his experiences.”