Alcohol abuse: why some veterans are suffering in silence

After their service, ex-forces’ personnel return to civilian life. While most transition and thrive in their new lifestyle and career, some find the adjustment more difficult. Here, Dr Paula Holt MBE, Pro Vice-Chancellor Dean of the College of Health, Psychology and Social Care at the University of Derby and ex-British Army officer, discusses why a growing number of veterans are coming forward to deal with alcohol misuse after many years of struggling to ask for the help they need.

After eight years’ service in the Army, I moved back into civilian life and can fully appreciate how challenging this transition can be. For me it was relatively straight-forward. I had just had a baby and managed to get a job in the NHS fairly easily. For many though, leaving the Armed Forces is not just a change of job, it’s a complete change of lifestyle.

In the Armed Forces you know what you are likely to be wearing each day, where you will sleep, where you will eat, who your colleagues are and what progression looks like. For a role that has uncertainty in terms of potential for deployment and finding oneself in situations that are unpredictable, being in the military can feel very secure.

For many, leaving the services means finding new work and a place to live, while at the same time adjusting to civilian life. Add in simple things like registering with a GP, adjusting to loss of banter with your ‘muckers’, learning to cook if you have never had to, or developing a new routine, and there is an extra dimension of adjustment. For veterans who have seen active service and may still be struggling with coming to terms with what they have experienced, these seemingly ‘normal’ activities of adjustment can feel insurmountable.

When under pressure we all have different ways of handling things, and some veterans find themselves consuming alcohol as a means of coping with changes to their life, and what they could perceive as not fitting in or being understood. Many veterans report that it is not easy to speak to someone who lacks understanding of military life about experiences they have had within their service life that may still be troubling them. If reliance develops on alcohol as a means of coping, then it becomes a problem.

It is reported widely that the current pandemic has had a negative impact on mental health. The isolation that it has brought can exacerbate mental health concerns, stress and loneliness, causing some to turn to alcohol as a means of coping. In May after the first UK lockdown, Alcoholics Anonymous reported a 300% increase in enquiries, and in August the British Liver Trust said it had seen an increase in calls of 500% since lockdown began.

These headlines suggest that the uptake of support services is high, but the reality is that many veterans don’t feel comfortable asking for help or support. When you are in the Armed Forces you are taught to be resilient. Training gets you used to being uncomfortable, tired, hungry, and lacking in sleep, for example. Operational tours mean work is a 24/7 activity. You don’t complain, you ‘Soldier On’. When a veteran enters civilian life that reluctance to raise a concern or ask for help can often prevent her/him reaching out for support or advice. The default position of endurance stays with them, making them reluctant to seek help when they most need it. Research from Combat Stress, the UK’s leading mental health charity for former servicemen and women, found that veterans with alcohol addiction are putting off seeking help until their sixties.

I led mental health services for military personnel and their families during my years in the Army, and headed up Drug and Alcohol services in the NHS when I left, so I have seen the veteran and statutory service perspective. I continue to work with veterans through my work with the Armed Forces Covenant at the University of Derby, as a Director of the Soldiers Arts Academy and as patron of the STAND TO project in Derbyshire.

STAND TO was launched in 2014 by the Derbyshire Alcohol Advice Service (DAAS). Based on the findings of the government’s consultation on a Strategy for our Veterans in 2012, DAAS was approached by Derbyshire County Council to explore the possibility of expanding its services to include working with veterans and providing a specific veteran support service.

The result is a thriving project aimed at improving the lives of the ex-forces community affected by alcohol misuse in Derbyshire. There is now a dedicated team of trained staff, all with experience of the Armed Forces providing a responsive service for anyone who has been in the British Army, Navy, Air Force, Marines or Reserve/Territorial Forces.

The service receives over 100 referrals per annum and provides advice and support to many more affected veterans and their families. As one STAND TO client told the service “This project has literally saved my life, I was at rock bottom, now I have taken part in recovery activities, made new friends and replaced much missed camaraderie. Thank you to my worker, keep up the good work”.

Admitting you have a problem with alcohol use can be hard and I understand the conflict many ex-forces personnel and veterans will feel about asking for help, but I am incredibly passionate about the work we do at STAND TO and would urge anyone who needs support to get in touch.

The way our team offers support has had to adapt due to the pandemic, but they are still taking referrals and providing telephone and online appointments. If you don’t think alcohol is your main issue, but would like support with your relationship, housing finances and or any related issues, the service also provides a general Veteran Information Point, where a range of support services can be provided. Find out more about STAND TO and the important work they are doing on their website. 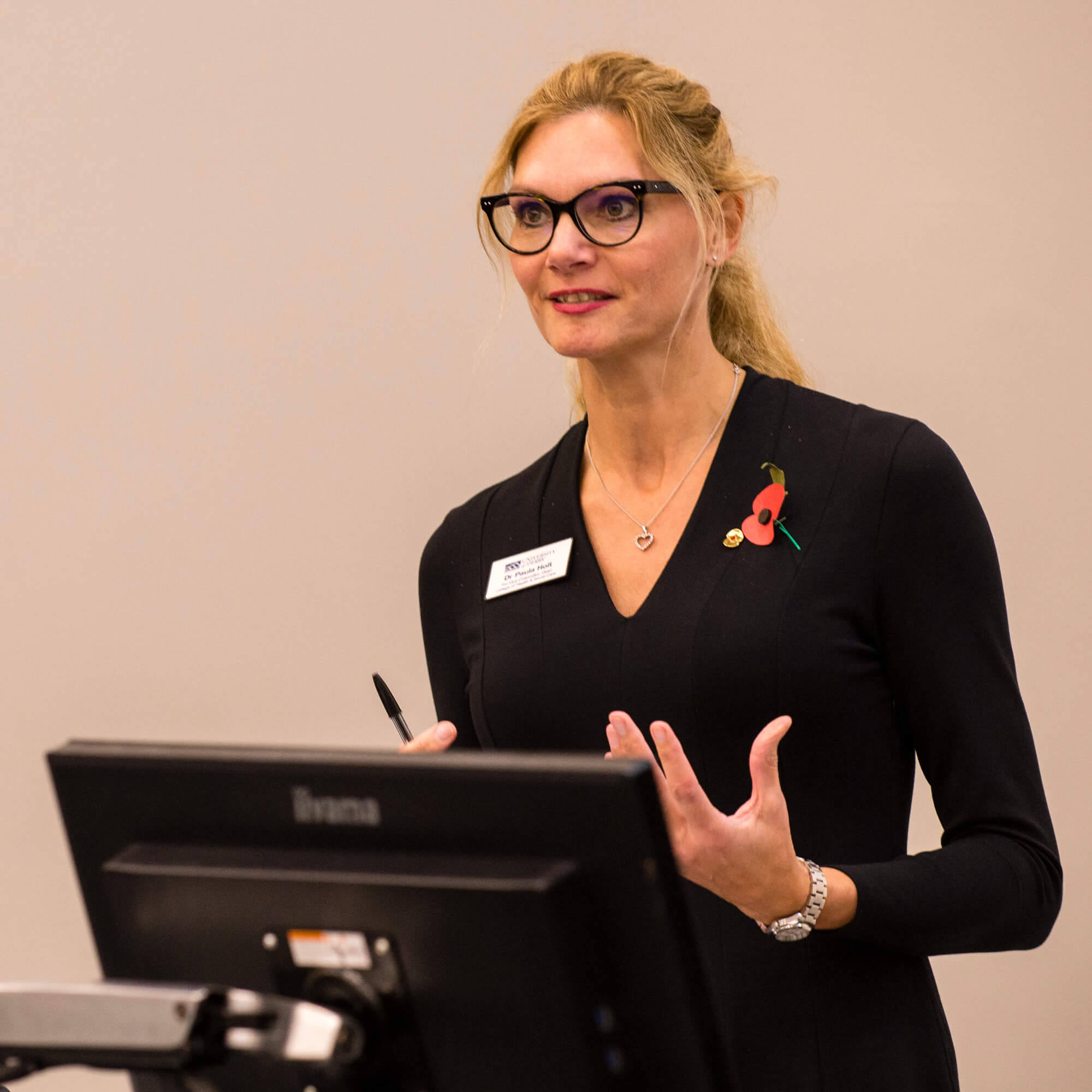 Paula Holt
Former Pro Vice-Chancellor and Dean of the College of Health, Psychology and Social Care

As former Pro Vice-Chancellor (PVC) Dean of the College of Health, Psychology and Social Care, Paula led and managed a large group of staff across two schools (The School of Nursing and Professional Practice and School of Allied Health and Social Care), to develop and deliver a range of high-quality health and care programmes.