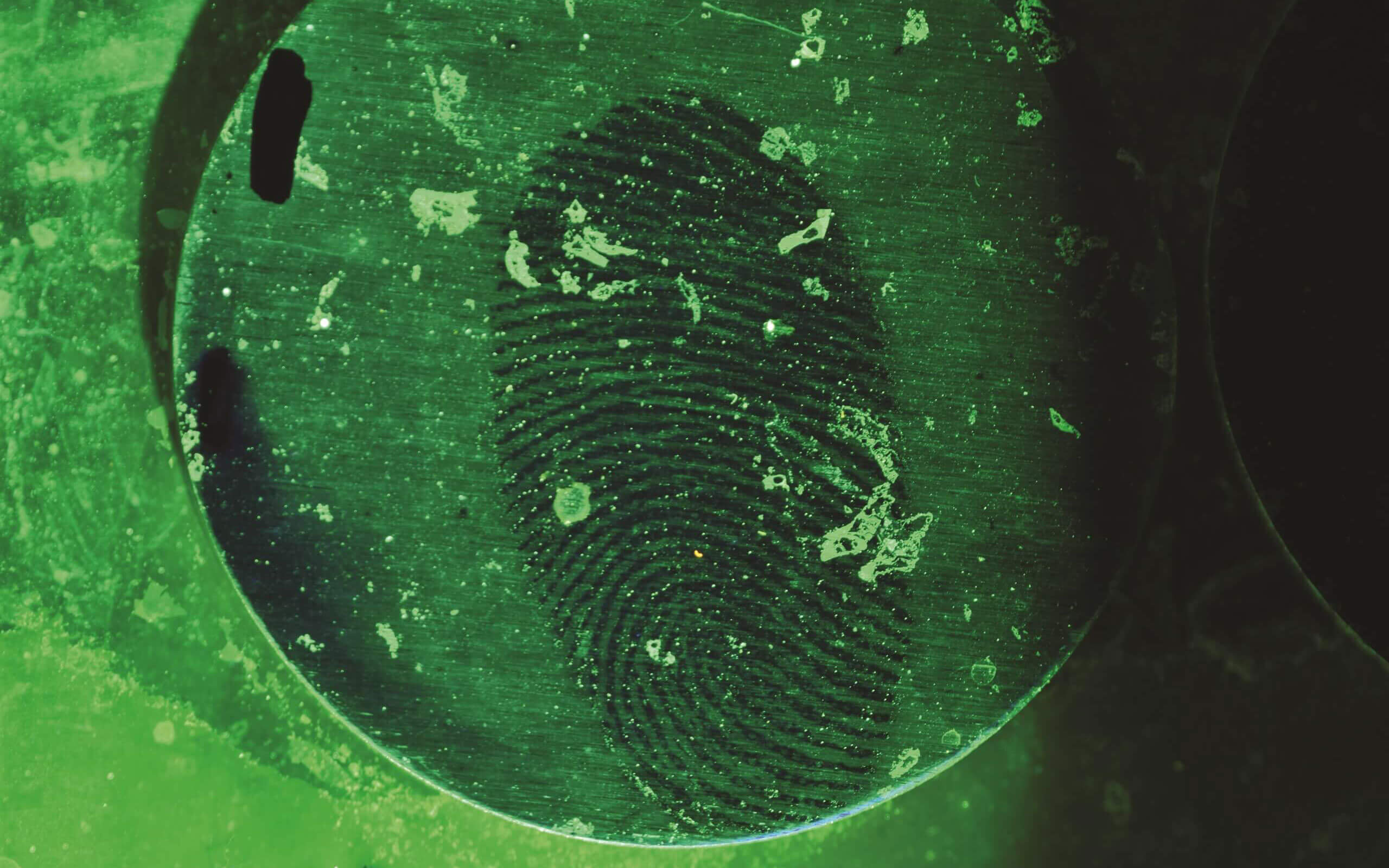 Our researchers are generating distinctive, world-leading and impactful research as part of our commitment to becoming a more research-focused institution.

The University has already gone through two Research Excellence Framework (REF) assessments and is now working towards a third, due to take place in 2021. Between our first two assessments, the percentage of research we submitted that was judged to be of at least ‘internationally significant’ rose from 67% to 75%. Here are some examples of recent research projects at Derby.

A team of forensic science researchers at the University developed a breakthrough identification technique that helps develop fingerprints after prolonged periods of time.

The research, in collaboration with the University of Nottingham, has developed an approach that uses Time-of-Flight Secondary Ion Mass Spectroscopy (ToF-SIMS), which is capable of revealing fingerprint ridge detail that is exceptionally clear and can be analysed up to 26 days after deposition. Up until now, fingerprint techniques used by forensic scientists have always found metal surfaces such as knives and firearms very challenging, but this breakthrough technology could make it possible.

To conduct the study, fingerprints from six donors were taken every day for 14 days. They were put on to disks of brass, aluminium and stainless steel and treated simultaneously so the effects of ageing could easily be determined. Using an ion beam, from the ToF-SIMS technique, the researchers were able to detect and visualise the fingerprint secretions, in order to determine which metal surface was capable of preserving those previously undetected.

The results showed that the fingerprints developed using traditional techniques did not work nearly as well, with one showing no results at all after the 14 days, unlike the ToFSIMS method, which was used repeatedly up to 26 days after initial sampling – the first time this has ever been done.

The MadeAtUni campaign aims to highlight the impact that universities can have on people, lives and communities by shifting the perception of British universities and demonstrating how they are involved in some of the UK’s most significant and life-changing innovations.

Since its launch in November, the UUK campaign has gained celebrity support from James Nesbitt, Rebecca Adlington OBE and Alistair Stewart. By June it had reached more than 46 million unique social media users, led to 95,000 visits to MadeAtUni.org. uk, and generated 343 items of traditional media coverage.

As part of this campaign, universities were asked to submit ‘one thing’ that demonstrated impact. Derby’s nature connectedness research was featured in the Best Breakthroughs list, under the ‘Environment’ theme, and its work around improving kidney dialysis treatment in the 100+ ways universities are saving lives and keeping us healthy list, under the ‘Fighting Disease’ theme.

Online MSc health psychology student Freda Gonot-Schoupinsky developed a new smartphone concept called ‘the Laughie’, which has been shown to significantly improve people’s overall wellbeing through encouraging them to laugh.

The Laughie works in a similar way to a Selfie, but instead of taking a photo of yourself, you record your own joyful laughter for one minute using your smartphone’s inbuilt recording software. You can then listen and laugh with your Laughie, whenever you have a minute, to increase your wellbeing.

The study, supervised by Dr Gulcan Garip, the University’s Academic Lead for Psychology, investigates the impact of laughter on wellbeing, and to answer calls from the medical community for a practical laughter prescription.

During the study, 21 participants (aged 25 to 93) created a Laughie and used it three times a day for one week. The Laughie was shown to increase overall absolute World Health Organisation Wellbeing Index scores, such as feeling cheerful, active, relaxed, rested and interested in life by 16%, and 19 participants reported post-intervention increased wellbeing.

The Corporate Communications team collaborated with Ulster University on its #ResearchHour social media campaign to help promote research at the University and the expertise of our academics.

Each week the team takes over the @DerbyUni Twitter account to showcase the breadth and depth of REF-standard research conducted across the University and reinforce the impact it has on social, economic and public policy.

To date, more than 80 academics covering 20 subjects have taken part in the campaign which has received over 136,500 impressions, 1,800 engagements and 270 retweets.

Recruiting teachers and keeping them in the profession has become a critical issue for the UK education system.

The team has delivered a six-module Compassionate Mind Training (CMT) programme with teachers from a number of schools across Derbyshire to help them gain greater understanding of their emotions.

The trial, which is the only one of its kind in the UK, has shown the many benefits of CMT in educational settings, including positive changes in wellbeing that help staff deal with the emotional difficulties of their job.

The team is now working on the second phase of the research, trialling a pupil curriculum in collaboration with Roundhill Academy, in Leicester.

It is hoped that the Centre will enhance the skills of rail sector employees, while also supporting around 80 supply chain businesses, 15 new collaborative research projects and shepherding 20 companies through innovation funding applications, by 2022.

University’s College of Engineering and Technology, said: “The Rail Research and Innovation Centre will provide expertise and technology with the capacity to transform the development of rail transport, allowing organisations to get the best value out of data and find better ways of decarbonising the railways.

“It will also provide opportunities for small and medium-sized enterprises in the rail supply chain and associated industries to collaborate with us in innovative and exciting ways. This will help to put them at the cutting edge of the industry, unlocking opportunities for them not just regionally and nationally, but potentially across the world too.”

In a collaboration between the University, the Royal Derby Hospital and the University of Nottingham, a kidney dialysis study is being conducted to improve the lives of thousands of people worldwide who are dependent on the treatment.

The iTrend project aims to predict a patient’s blood pressure level so that their dialysis treatment can be tailored to ensure it does not cause negative longterm physical effects.

The project, funded by the MStart Trust, a Derby-based charity, is being led by Professor Paul Stewart, Research Chair in Intelligent Systems at the University, and Professor Maarten Taal and Dr Nick Selby, consultant nephrologists at the Department of Renal Medicine at the Royal Derby Hospital and the University of Nottingham’s School of Medicine.

The Royal Derby Hospital ran a study involving 50 patients, collecting real-time blood pressure and other physical data while patients underwent dialysis, which can take up to four hours. Analysis of this data has led to the identification of physiological “fingerprints”. These fingerprints will help to personalise the treatment, and, it is believed, could have applications for the wider population too.

A unique experimental synthetic dialysis patient – nicknamed Steve – was also created to prototype a cheap, non-invasive and accurate method of continuously measuring blood pressure. The team is now applying for a patient-study approval.

Research conducted by PhD student Omimah Said has revealed new insights into potential screening methods to identify those at risk of dependence on painkillers, and guide the design of interventions to help people reduce their use.

Chronic pain affects up to 1.5 billion people worldwide, including 7.8 million in the UK. The study at the University, which was supervised by Professor of Health Psychology James Elander, and Associate Professor and Reader in Emotion Science Dr Frances Maratos, showed that the best predictor of painkiller dependence was not misuse or abuse of medication, but the frequency of its use.

Painkiller dependence is a major social issue. In the UK, prescriptions for powerful analgesics have risen dramatically in the last few years, from three million in 1991, to 12 million in 2006, 24 million in 2016 and 41.4m in 2017, according to NHS data reported by the Sunday Times. Some of the biggest rises have been seen in oxycodone, co-codamol, tramadol, morphine and fentanyl.